A Report on the Developments in Women’s Ministry in 2015 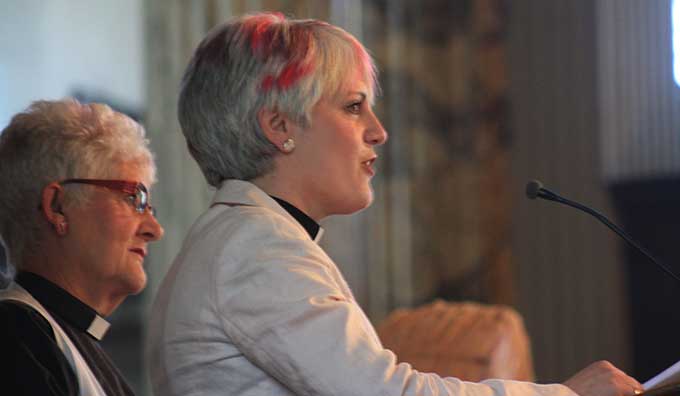 Women in the Episcopate

There are 42 Diocesan Bishops in total.

Both Bishop Rachel and Bishop Christine have become members of the House of Lords by virtue of the Lords Spiritual (Women) Act 2015.

There are a total of 75 Suffragan or Area Bishops.

WATCH is delighted that so many women have been appointed as bishops in such a short space of time. The consecration services were occasions of great rejoicing, celebrated by the wider world as well as the church.

Such appointments have already become a normal part of life in the Church of England. As the spotlight moves on to other issues we hope that this momentum will be sustained, particularly in relation to the appointment of Diocesan bishops.

Under existing arrangements, eight ‘participant observers’ elected by senior women in each region will continue to take part in meetings of the House of Bishops. (In the South East region Rosemary Lane-Priestley has recently been elected to replace Rachel Treweek, who is now there in her own right.)

The most recent figures from 2012 showed that women accounted for:

Out of the total of 3677 ordained women:

2012 – Parishes formally not accepting the ordained ministry of women:

WATCH has asked (and will continue to ask) Ministry Division to provide up to date statistics so that we can monitor and analyse developments from the 2012 baseline.

All ordinands and clergy moving to new posts are now asked to assent to ‘five guiding principles’ outlined in the House of Bishops Declaration.

It has become customary at consecrations this year for some bishops not to lay hands on the person being consecrated. Excerpts from the Archbishop of York’s letter to the northern bishops before the consecration of the Bishop of Burnley:

‘The arrangements … are not binding on the Archbishop now or in the future. However, in seeking to build a future based on trust, mutual respect and the highest degree of communion possible, it is hoped that these arrangements will begin to shape good practice and custom.

The Archbishop will delegate to another bishop the authority to celebrate the Liturgy of Ordination and the Liturgy of the Eucharist. That bishop will exemplify commitment to the Five Guiding Principles and the flourishing of those whom the candidate for consecration will be able to serve sacramentally and with similar commitment to the whole of the House of Bishops’ Declaration.

When the bishops gather together for the Ordination Prayer, in close proximity around the candidate, the Archbishop will lead all other bishops present in exercising gracious restraint at the laying-on of hands, permitting two bishops, nominated by the Archbishop … to assist in the laying-on of hands, in order to fulfil the requirements of canon C2.1. All other Bishops will remain in the arc around the candidate.’

Supplementing the existing arrangements for traditionalist Catholics, the Bishop of Maidstone was consecrated in 2015 to minister in conservative evangelical parishes that have passed the required resolution. The Bishop of Maidstone also has ‘participant observer’ status in the House of Bishops.

d) The work of the Independent Reviewer

As far as we know, only two formal complaints have been raised with the Independent Reviewer this year, one by WATCH and one by Forward in Faith:

‘I understand the concern expressed by Ms Cotton on behalf of WATCH that the chrism masses organised by bishops who are members of the Society of Saint Wilfrid and Saint Hilda emphasise the continuing division within the Church of England on the subject of the ordination of women and are hurtful to women clergy and their male supporters. However I do not find that these masses are, in themselves, a breach of the principles set out in the House of Bishops’ Declaration. Rather they are a consequence of the underlying division and of the pastoral arrangements the Church has thought it right to make for those who hold the minority view. Provided the masses continue themselves to be conducted within the spirit of the Five Principles, with due sensitivity to the feeling of others, and with full regard to the lawful authority of the relevant diocesan bishop (whether male or female), they will continue to be consistent with the House of Bishops’ Declaration.’

‘ in failing to spell out the precise scope of Mrs Smith’s intended ministry as an Associate Priest in the Benefice of North Cheltenham, Bishop Martyn failed to make the appropriate pastoral and sacramental provision for the Parish of All Saints, which it was entitled to expect under the House of Bishops’ Declaration.’

‘Where it is the intention to appoint a woman to minister otherwise than as a member of the team in a multi-parish benefice in which one or more parishes has, or is deemed to have, passed the resolution set out in paragraph 20 of the House of Bishops’ Declaration:

(a) the PCCs of the parishes in the benefice should be consulted, before a licence is issued, about the nature and extent of the ministry she is to be licensed to exercise; and

(b) the licence which is then issued to her should specify the nature and extent of the ministry she is authorised to undertake in the parish or parishes which have passed the resolution (as well as in the other parishes of the benefice).’

Towards the end of 2015 the Independent Reviewer invited WATCH to comment on the notes he had drawn up concerning the operation of the Resolution of Disputes Procedure.

In response WATCH raised concerns about the inbuilt gender bias of the church; the focus on those who oppose women’s ministry; the lack of a reference group from the House of Bishops that included supporters of women’s ministry as well as dissenters; the scope and status of his recommendations; some of the terminology in his reports; the availability of legal resources for all; and the importance of trust rather than law.

Liberated from working on the legislation for women in the episcopate, WATCH has relished the opportunity to return to its core task of working more generally for gender justice, equality and inclusion in the Church of England:

The work of the Transformations Group

In 2011 Archbishop Rowan Williams convened a ‘Transformations’ conference at Lambeth Palace to explore the lived experience of women in ordained ministry 17 years after the first women were ordained as priests in the Church of England. The conference report was presented to the College of Bishops a year later. Since then the Steering Group for that conference (made up of representatives from WATCH, DARC, NADAWM, AWESOME & CMEAC) has continued to steer the Transformations agenda, commissioning research and raising the profile of issues surrounding women’s ordained ministry.

The work is currently focusing on two of these areas: young vocations and larger churches. Using a range of methods, including statistical analysis, participatory group discussions and semi-structured interviews, the research seeks to answer the following two fundamental questions:

Research on gender and ministry on the Ministry Division website