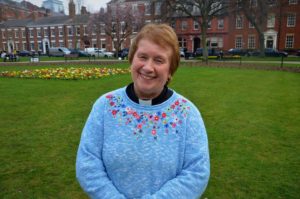 Memory sometimes plays tricks on you, and especially if you are looking back 25 years. But I think that  I can remember it quite clearly amidst all the excitement and joy in Ripon Cathedral on that day. It was Trinity Sunday morning in 1994, and there were two specific ‘moments’ that will never leave me.

Firstly we were told that we could only nominate 5 priests to come around us to lay on hands at the ordination. Naturally, that made total sense to us women – it’s important that the congregation should actually see what’s going on, and the whole thing shouldn’t be obscured by a phalanx of the priestly caste! If nothing else, we had learnt that fact in those years we had waited to become priests. How often we had watched the priests become the cork in the bottle, the barrier between law and spirit! However, best laid plans don’t always work, and when it came to it, many, many priests present who had waited so long for this moment, broke ranks and gathered around me and the  other ordinands. It created quite an overwhelming  environment from my point of view. The hugely resonant sound in the cathedral suddenly grew soft, almost muted, as I felt the weight of my colleagues’ hands upon me and their physical presence around me. It was pure affirmation, acceptance and comfort as together we faced the shared challenge of priestly ministering, a ‘whole’ priesthood in the church at last.

Secondly , as we women processed out of the west door at the end of the service, we turned the corner, joyfully walking on air through those ancient graves at Ripon, and from out of nowhere two beautiful white doves flew down and settled on the ground before us. Again it was such a sign, such an indication that, whatever difficulties and mistakes were to come (and there have been plenty), this ordination was of God and was also the will of the people.

Yes, I’ve never forgotten these two ‘moments’ . For me they have held both inspiration and, surprisingly, a little bit of danger in these past 25 years that I’ve served as a priest. The past years have truly been a ‘coming home’ for me and will continue to be until my dying day, I trust. My personal pilgrimage has taken me through chaplaincy, parishes big and small, two Area Dean’s roles and two  Cathedral  Residentiary Canon’s roles, as well as becoming Chair of NADAWM () for the past 4 years.

However I didn’t quite reckon with the seduction of a church which both attracts and repels. Yes, I felt the warmth and affirmation of God and the church at the moment of laying on of hands at priesting, but the church can too easily become a place to hide when the going gets tough outside of it. The institution can become lazy to injustice both within and without. That just will not do; it’s not what it is about, and it can become a danger for women as much as men as we work within the structures particularly as Bishops, Deans and Archdeacons. We must always be serving one way or another at the margins, listening to the world and witnessing to the God who can be found at the heart of it.

It has been privilege and I am filled with gratitude  to have been a pioneer and become one of the first women priests in the Church of England, but this is an unfolding journey in a world where the church appears to be becoming increasingly irrelevant. There is no room for complacency. As I now settle into retirement, there must be no settling into unchallenging ways by cultivating ears that are deaf and eyes that are blind to the cries of the world. I will continue praying for my sisters as they minister courageously in God’s wonderful world.

Canon Wendy Wilby was ordained priest in Ripon Cathedral in 1994. Her post before retirement was as Precentor of Bristol Cathedral, where she was also Dean of Women’s Ministry. She also became Chair of NADAWM (National Association of Diocesan Advisers in Women’s Ministry)