I am sitting down to write this on St George’s day, England’s patron saint and famous dragon slayer. This morning I sat in Christ Church Cathedral enjoying the light pouring through the South window of the Archangel Michael, surrounded by his army of angels, defeating the dragon. Both of these saints feast days are significant for me. My birthday falls on the feast of St Michael. I was one of 62 wonderful women ordained priest on St George’s day in St Alban’s Abbey, 1994.

As I muse on these well-known dragon slayers I am reminded of the less often told tales of women saints who dealt with dragons. 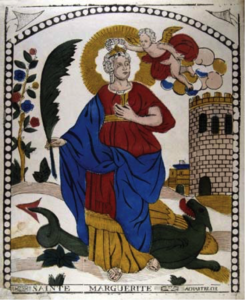 St Margaret of Antioch(feast day July 20), patron saint of women in childbirth was an immensely popular saint in the middle ages. After being persecuted for her faith she encounters a dragon whilst in prison. In some accounts she vanquishes the dragon simply by making the sign of the cross but in other stories she is eaten by the dragon and makes the sign of the cross from within his belly which then splits open so that she is able to step out. Sadly, this did not prevent her execution but in her final prayers she remembered especially women in child birth and many would go into the uncertainty of labour trusting in the intercessions of St Margaret who could overcome a dragon. 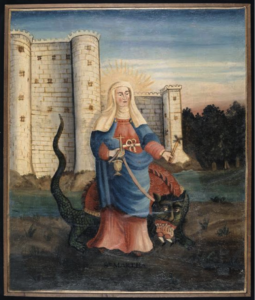 St Martha (feast day July 29th) so the legends tell us, travelled from Bethany to a new life in France after Jesus ascension. There she encountered a community terrified by a dragon. She came upon the dragon eating a man and overcame him with Holy Water and a cross. She was able to place her girdle around the dragon’s neck and lead him around before taking him to a place of execution. 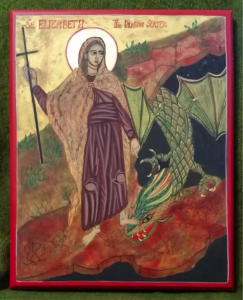 Elizabeth of Constantinople (feast day April 24th) was an Abbess sometime during the 6th-9th century; she was also a dragon slayer. The land given for her convent was hard to manage because of the local dragon. She called the dragon out of his cave, grabbed it by the tail and stamped on its neck. Other accounts suggest that she simply spat at the dragon which promptly died. She went on to lead a convent that provided care and support for many and is often known as Elizabeth the Miracle Worker.

Clearly, these legends are stories. There is little evidence for the existence of these terrible dragons. Yet, they tell us something about faith and courage. In the face of seemingly insurmountable problems the power of prayer and the belief that right will prevail, can overcome even the most fearsome opposition.

What I love about these women dragon slayers is that they were the ones acting; they were not waiting for a man to ride in on a horse to save them. They were not great swordswomen and rarely seem to have approached these dragons with armour. There is a degree of pragmatism about the accounts of how they faced up to a problem, often with prayer, naming what was wrong and calling it to account. These dragons were overcome by women who went on to be known for their care for others, their healing work and their practical faith. They did not go looking for dragons but when they found one causing a problem they simply dealt with it!

In a world that can often seem overwhelming I take courage from these women of faith. We live within the shadows of what Paul calls the ‘Powers and Principalities of this world’ which seem to hamper people’s ability to flourish; which keep people in places of fear and oppression. There is the dragon of Patriarchy, the dragon of Racism and the ogres of Greed and others perhaps harder to name. We need to find the courage of Margaret, Martha and Elizabeth to call out the dragons and overcome them, not through violence, but through confronting them with the values of Christ and the prayers of the faithful.