My first walk in the Peak District after lockdown restrictions were lifted, 31 weeks pregnant 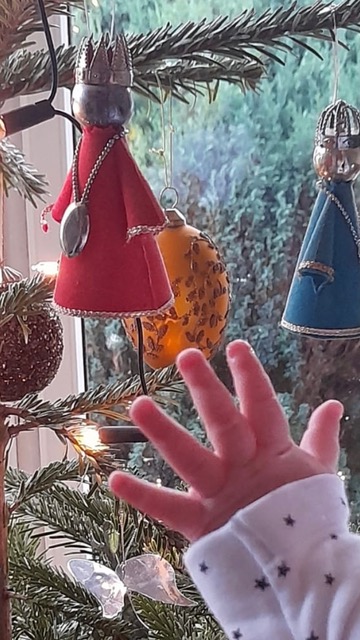 Ruth’s hand in front of the Christmas tree

In this strangest of years, I became a mother for the first time. Now in my late forties, I had long thought this chapter of life was closed to me. I am still reeling from the miracle of Ruth’s birth in July. Here, I offer some reflections on the experience of being expectant in a global pandemic.

Ever since she was tiny, Ruth has been fascinated by her hands and the contrast of the light behind them. She holds them up to the sky and to windows and, now, towards the Christmas tree lights. In a year of floods, Covid restrictions, Brexit negotiations, a tumultuous American election and a pregnancy in lockdown, this has helped me to look beyond and to hang onto that light of God which is so easy to miss. It has made me recall that, during my pregnancy, seemingly adverse situations were regularly balanced by moments of grace. I am also reminded of the poem, Autumn’s Fall, by Kelly Hardie and a particular line:

“The spaces in the branches stretch and grow”

The start of my pregnancy was pre-lockdown and so we were fortunate that my husband was able to attend the twelve-week scan. Thereafter, as restrictions increased, antenatal appointments were strictly mothers only. Once bustling waiting rooms at the local maternity unit became quiet with socially distanced, single chairs and lone mothers wearing masks. However, united by the leveller of pregnancy and the anxiety of scans without partners, we did talk. There was the woman whose three children needed to wait outside the hospital. She kept them on speaker phone while promising them chocolate and confiding in me the stress of home schooling, the biggest bump she had ever had and the long hours her husband worked as a delivery driver. A friend who was expecting twins needed weekly scans. When we happened to meet in the waiting room, she spoke of her fear of what might appear on the screen but also of the kindness of the sonographers who, wearing rubber gloves and visors, would still hold her hand.

Pregnant women were classed as clinically vulnerable and so, during the first lockdown, my world shrank to home and to medical appointments. I was very conscious of the privilege of a comfortable home and a large garden and of having the time and resources to potter. Many people in Sheffield, some just a few streets away, had a very different experience. My husband and I were both working from home which gave us precious time to ‘be’ and to prepare for the baby’s arrival. I will remember that time for the sunny days and the lushness of the garden. I finally had the time to water bedding plants every day. We got to know the neighbours better, including those opposite and a few doors down. In May, our road had a VE Day street party, most houses bedecked in union flags and everyone out in deck chairs. I got to parade my bump properly for the first time. The lifting of restrictions in June for the clinically vulnerable meant that I was, again, able to walk in my beloved Peak District. I managed twelve miles on a hot day, the clear views adding to my sense of freedom.

Our antenatal classes had to be delivered via Zoom. Despite our disappointment, we established close bonds with the other parents-to-be and we have continued to meet, according to changing tier restrictions. Park benches and flasks now feature heavily in my social life as a new mother.

At my thirty-six-week scan, the baby was found to be laying transversely. I needed to be admitted to the maternity unit as a precautionary measure. The obstetrician confided that this would likely be the longest three weeks of my life. I won’t deny the tedium and the anxiety and I tried and failed to reframe it as a silent retreat. But I will always treasure that time of enforced rest for the final mental preparation for motherhood, the long baths and all that time to read. I also finished editing Outlook magazine from my hospital chair.

Visitors were not allowed in the hospital and so I met my husband each evening on a low wall in the car park, both wearing masks and socially distanced. The midwives said how romantic this seemed, and it was, in its way. But I also remember how much I longed to kiss and to hold my husband and my tears on the down days.

The maternity staff, dressed in PPE throughout those hot summer weeks, were unrelentingly kind and good humoured. Most women were on the ward for only a few days, to either be induced or if they had pre-eclampsia. This was particularly tough for women in the early stages of labour whose partners were only able to join them when things were more advanced and, then, on a different ward. I would pray and feel helpless while God worked by the next bed, wearing a midwife’s uniform.

As a long-timer, I got to know the staff well and became, I suspect, the ward pet. I received chocolates on my birthday and the head of midwifery, a friend of my sister-in-law, visited me every morning. Most importantly, I became friendly with the ward domestic which led to extra rations of tea in a big mug.

As the baby continued to lie in a transverse position, I was booked in for a caesarean section. Strict Covid policies meant that I could not see my husband beforehand and we met when I was on the operating table, both wearing masks. However, my main memory is not of these restrictions but of the good humour and how relaxed theatre was. Then, of course, there is the indelible image of seeing our beautiful, perfect daughter for the first time. Partners were only permitted to be with mothers for up to an hour after the birth. As I needed a few hours in the high dependency unit, we were allowed a little more time together as a family. Through a post-caesarean fug, I remember being visited by the surgeon, now dressed in a tracksuit and baseball cap. He had stayed beyond his shift to make sure I was okay before his usual habit of jogging home.

I stayed in hospital for a further five days, only seeing my husband on video link for all of that time. This was the hardest part for us both but, at the same time, I was entranced by the marvel of our little girl. It was an immense joy to, finally, be discharged and to start family life back at home.

With a mother on the WATCH committee, Ruth is, almost inevitably, a future Archbishop of Canterbury. However, I pray that, whoever she becomes and whatever she encounters in her life, she remains able to glimpse the light of God beyond and around her. I extend this hope to you.